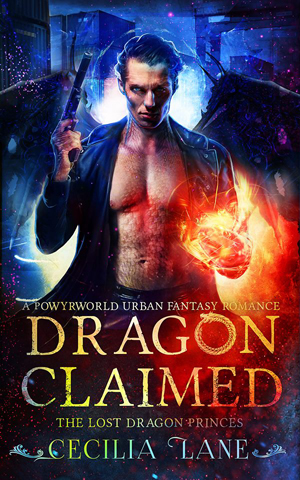 A fire-breathing mob Boss. A court spy with memory loss. A jealous enemy waiting for the right time to destroy them both…

After the devastating loss of his mate and the surprise revelation of his dragon shifter Powyr, Eoghan Gilchrist sets himself to consolidating his power as head of a Shadow Mob family. The death of a capo brings to head a brewing territory war with neighboring Shadow Yakuza.

Itching for the coming fight, the last thing Eoghan expects to distract him is his missing mate’s sudden reappearance.

Annika Leeds has spent the last year questioning her sanity. Her memories begin when she woke up in a homeless shelter knowing nothing except her name. Desperate when no one believes her dreams of being a dragon shifter are real, she makes her way to a wytch rumored to be able to help.

Instead, Annika finds herself recognized by a man claiming to be her mate.

Annika, unable to resist Eoghan’s numerous temptations, soon finds herself at the center of jealousy, betrayal, and war. As her memories return, both Annika and Eoghan are left with more questions than answers.

Can Eoghan and Annika navigate the fallout of a discovered double life before their enemies strike a final blow?

Welcome to Powyrworld, where dragons, wytches, and vampyrs battle for power and survival among humans while their ancient, demigod ancestors watch from afar, willing to step in and restore balance should any one conflict threaten the survival of the planet…

The Lost Dragon Princes: The identities of the 5 missing Princes’ of the Dragon Court are finally revealed…
Dragon Star by Anna Morgan & Emma Alisyn. Vampyr rockstar prince meet beautiful dragon general.
Dragon Mob by Tiffany Allee. A secret dragon prince of the Mob. The favored daughter of a rival Don. A mating that reveals a family secret…
Dragon Blood by S.A. Ravel. A Thunderbird skinwalker seeks the help of a reclusive dragon wizard against the dark mage threatening their secret baby.
Dragon Prince by Emma Alisyn. coming soon
Each title is a HEA standalone connected with the book before and after, but the series does not need to be read in order of publication.

These paranormal shifter, urban fantasy, romance books are for readers who enjoy fast-paced action, adventure with lots of magic, steamy love scenes and heroines who kick ass. Our heroes are alpha shifters who fight, growl, and kill for their mates—but never cheat or try to hold a girl back when her earrings come off. Each romance will be a standalone with a happily ever after, no cheating, no TSTL or miscommunication, and plenty of heart-pounding personal conflict.